At Queen of SMP, each treatment is customized to fit your unique needs. All of our services are done by our founder Zoe Belle, one of the most talented SMP and Paramedical Tattoo Master Artists in the field. Zoe customizes each client’s treatment to perfectly suit their level of hair loss, type of hair loss, hair color, skin tone, bone structure and aesthetic goals. Below, you’ll find a list of some of the types of the services Zoe can provide as a resident artist in Las Vegas. Depending on your situation, Zoe may use one of these techniques or a blend in order to provide the most natural-looking results.

Let’s fix your hairline and get rid of your bald spot for good with SMP.

Stop letting your thin hair ruin your self confidence.

You’d be surprised at how many scars you can hide using different techniques.

SMP can hide your autoimmune condition and give you a natural and fuller look.

Natural results, no one will know you ever had Vitiligo.

Children can feel self-conscious about scars and hair loss, too. We can help.

Regain your confidence after mastectomy.

Ready to speak with Zoe? Click below to schedule a free consultation.

Zoe Belle, the founder of Queen of SMP, is a multi talented artist with a passion for mastering new skills. Before discovering her calling as an SMP artist, Zoe worked as a medical massage therapist, a fashion designer, a professional painter, and a tattoo artist. Today, Zoe is one of the best SMP artists in the world. She is known for her exceptionally natural-looking work, which she achieves thanks to her artistic skills, immaculate attention to detail, and drive for perfection. Zoe is also known for her compassionate and personable nature. For Zoe, helping her patients thrive again is as rewarding as achieving artistic perfection within her work.

Zoe was born in Hungary, but she’s lived in six different countries over her life, making her a citizen of the world. Zoe’s professional journey began in her home country, where she spent four years studying fashion design. After completing her design studies, Zoe received a degree in medical massage therapy and began working with doctors in med spas all over the world.

While working as a medical massage therapist, Zoe honed a number of skills, including home design and repair…

Zoe Belle is the artist behind Queen of SMP. Zoe is a multi talented artist with a curious mind and a desire to never stop learning and growing. Her passion for mastering new skills led her to explore a variety of careers over the years, which ultimately helped her discover her true calling: Scalp Micropigmentation, Paramedical Tattooing, and Scar and Skintone Camouflaging.

Zoe was born in Hungary, but she’s lived in six different countries over her life, making her a citizen of the world. Zoe’s professional journey began in her home country, where she spent four years studying fashion design. After completing her design studies, Zoe received a degree in medical massage therapy and began working with doctors in med spas all over the world.

While working as a medical massage therapist, Zoe refined a number of skills, including home design and repair. Zoe has helped countless people design and decorate their homes, and can fix anything just as well as any handyman. While home design would remain a hobby for Zoe, another one of her hobbies would eventually turn into a career. In her spare time, Zoe taught herself fine art. Eventually, Zoe began working as a mural painter artist to great success, earning acclaim and recognition within the art world.

Having set her sights on developing her artistic talents, Zoe continued painting and having her own art shows while living in Miami and then Chicago. While working on her paintings, she also decided to push herself and take her talent to the next level by making the human body her new canvas. Zoe began her career as a Body Art Tattoo Artist in Miami and continued her Tattoo Artist work when she later moved to Chicago.

In 2015, Zoe made her way to Las Vegas, where she primarily focused on her art and fashion design. However, while she enjoyed her artistic pursuits, she felt that something was missing. Zoe’s passion for helping people, first discovered when she worked as a medical massage therapist many years back, never left her. Zoe wanted to find a way to incorporate her care for others with her artistic talents and perfectionism. When she learned about Scalp Micropigmentation and Scar and Skintone Camouflaging, she knew that she had found her calling. Dedicated and driven as always, Zoe set out to learn everything she could about Micropigmentation in order to master the art of SMP.

Today, Zoe is one of the best SMP artists in the field. Zoe is known for her exceptionally natural-looking work, achieved thanks to her artistic eye, immaculate attention to detail, and drive for perfection. Zoe is also known for her down-to-earth, compassionate, and personable nature. Zoe loves meeting new people, listening to their stories, and learning about their life experiences. For Zoe, helping her patients thrive again is as rewarding as achieving artistic perfection within her work. 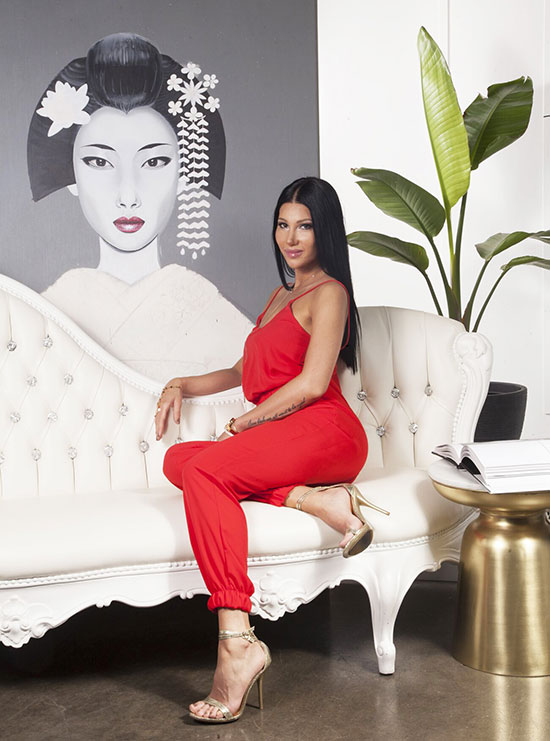 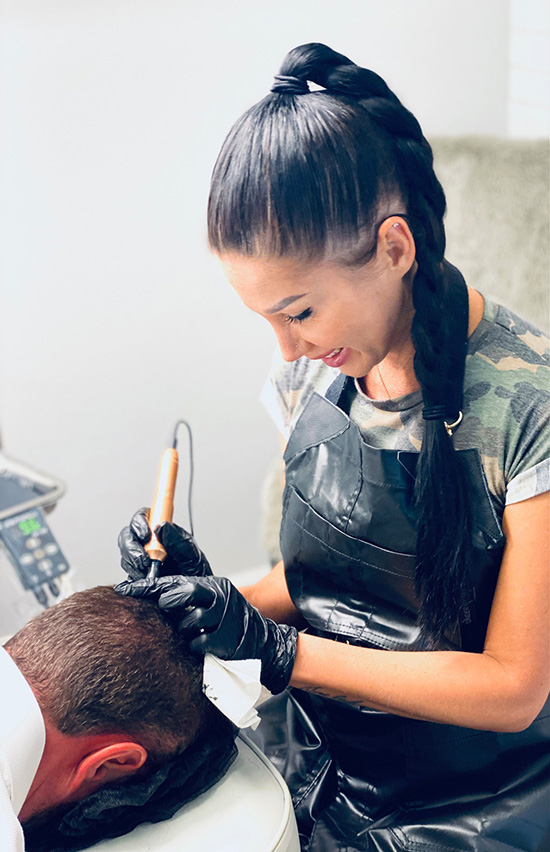 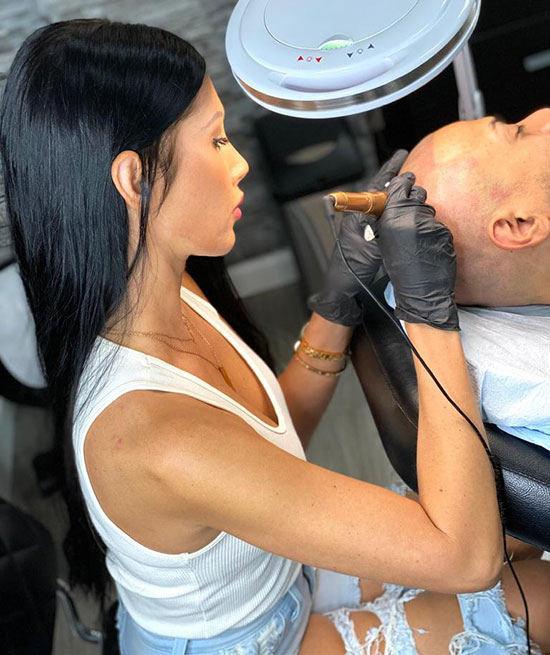 What is Scalp Micropigmentation / SMP?

Scalp Micropigmentation, also called SMP, is the ultimate non-surgical solution for hair loss. Scalp Micropigmentation is a treatment that uses tiny microneedles to place pigment deposits in the scalp, which replicate the look of natural hair follicles. These tiny follicle replicas can create the appearance of a full head of shaved hair, make a thinning head of hair look fuller, or camouflage scars on the scalp. 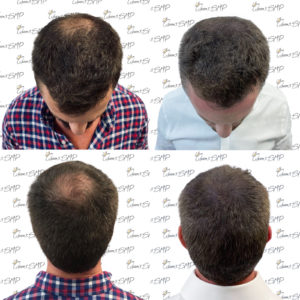 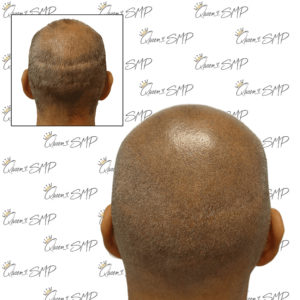 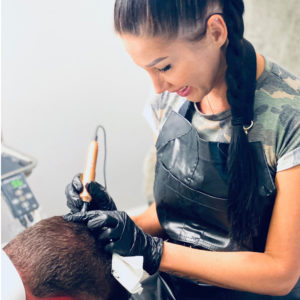 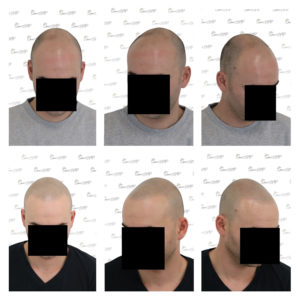 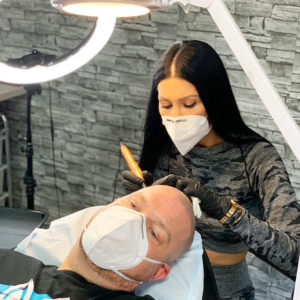 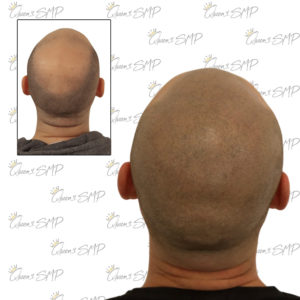 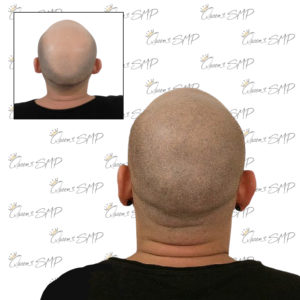 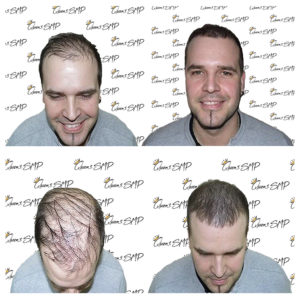 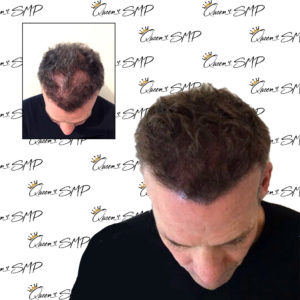 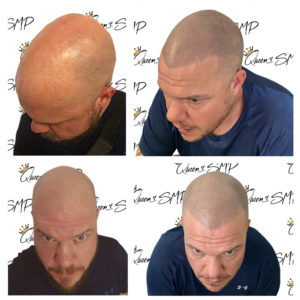 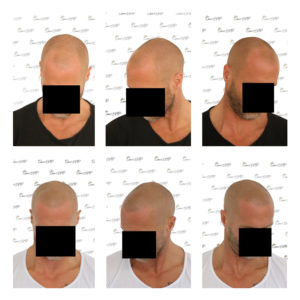 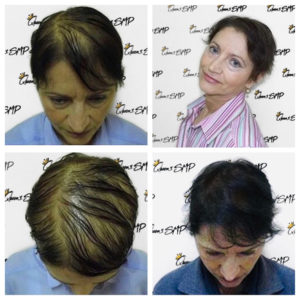 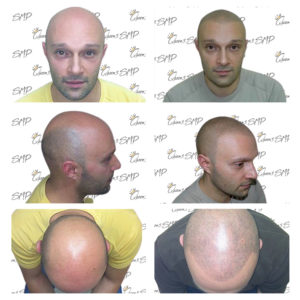 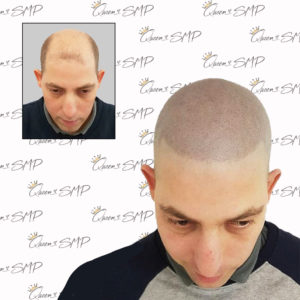 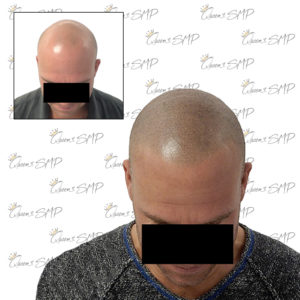 What is Scalp Micropigmentation?

How long will getting Scalp Micropigmentation take?

In order to create a natural gradient effect, multiple SMP sessions are needed. Most people need three SMP sessions to reach their desired result. Each SMP session should be spaced out at least a week apart and the duration time of each session will vary from person to person. On average, a person’s first SMP treatment lasts for 3 to 4 hours, while their second lasts for 2 to 3 hours and their third lasts for 1 to 2 hours.

How can I get a consultation?

Zoe can provide consultations in person, via a video call, or by responding to emailed images. Visit our contact page or email us at [email protected] to schedule your consultation.

How soon can I get my treatment after my consultation?

Typically, we can schedule appointments within a week or two of your initial consultation, but appointment availability can vary based on demand. If you’re concerned about making sure your appointment can happen within a specific timeframe, let us know and we’ll see what we can do to accommodate you.

Do you use tattoo needles at Queen of SMP?

No. We use nano needles that are a fifth of the size of a standard tattoo needle. We use these microfine needles because they provide a highly natural look that mimics the look of real hair follicles.

My scalp will be paler than my face if I shave my head. Should I tan my scalp before getting SMP?

No, please do not tan before your Scalp Micropigmentation treatment. Tanning toughens up the skin, which can make it harder for your skin to absorb the pigment. Zoe will take your natural skin tone and hair color into account when creating your custom color, so there’s no need to intentionally tan and risk toughening up your skin.

Do I need to shave my head or cut my hair before micropigmentation?

Whether or not you should shave your head or cut your hair depends on where you are in your hair loss journey and how you’d like to wear your hair in the future. Many people with longer hair that is beginning to thin do not need to cut their hair, while those who are are missing a lot of hair and are looking to achieve a shaved head look will need to shave their hair. Before your first SMP appointment at Queen of SMP, Zoe will explain exactly how you should prepare for your treatment.

When can I wash my scalp again after my treatment?

Three days after an SMP treatment, you can gently wash your scalp with water. After a week, you can resume using products on your scalp (such as shampoo, conditioner, and soap).

After getting breast augmentation with incisions in aerola, I thought it would boost my self-esteem. However, it did the opposite, due to the incision scarring. I am so glad I came across Zoe. She is an extremely talented artist. The scarring has been diminished, due to her artistic ability. I’m beyond thrilled and happy with my results. I feel back to my normal self again. Highly recommend!

Let’s face it, sooner or later with aging we all start to lose some of our hair. Unfortunately, for me it was a drastic loss of hair for being 50. I tried all kinds of hair growth products, but the outcome was very minimal.

Luckily, I heard about Zoe from a co-worker who swore on her expertise in Scalp Micropigmentation. This procedure was absolutely life changing for me! I got my confidence boost back up. Zoe is amazing at what she does.

Not only is she an incredible artist, but she’s also compassionate and very professional.

Zoe did a wonderful job on a big scar I got on my knee ten years ago rollerblading.It has always really bothered me to see my scar every time I was wearing a skirt or shorts. But, not anymore because Zoe blended it in perfectly with my skin tone. You can’t notice I had a scar.

She is very professional and knows 100% what she is doing. I’m so happy with the results!

I’ve known about Zoe’s amazing talents for many years especially as an artist. When I found out she was doing micropigmentation I had no doubt her work would be nothing short of perfection. And I was right. A job that usually takes around three hours to complete she did flawlessly in 2 1/2.

I couldn’t be happier with the results and I have no doubt she’s quickly establishing herself as the best in the business. I’ll refer everybody I know to her and to her only!

I’m glad I finally chose to get the SMP procedure done and met Zoe.
SMP is a game changer and I couldn’t be more happier with the results. Scalp Micropigmentation has truly exceeded my expectations. Only thing is maybe I wish I got it done sooner.

I can honestly say that my confidence is restored.
Zoe’s service is excellent and I would highly recommend to my friends, family or anyone dealing with any forms of hair loss.

Zoe is truly the best at what she does.

Please let me know how I can help you.
Schedule a free consultation today. 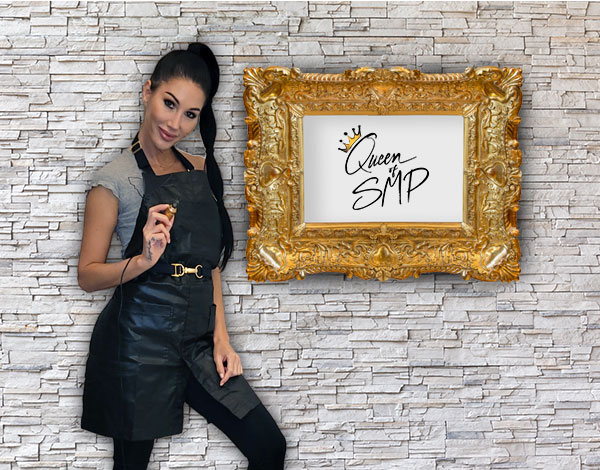